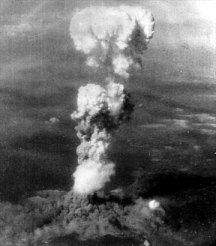 August 6 marks the 66th anniversary of the dropping of the atomic bomb on Hiroshima. Official announcement came through a press release issued by President Harry Truman:

Sixteen hours ago an American airplane dropped one bomb on Hiroshima, an important Japanese Army base. That bomb had more power than 20,000 tons of T.N.T. It had more than two thousand times the blast power of the British “Grand Slam” which is the largest bomb ever yet used in the history of warfare.

The Japanese began the war from the air at Pearl Harbor. They have been repaid many fold. And the end is not yet. With this bomb we have now added a new and revolutionary increase in destruction to supplement the growing power of our armed forces. In their present form these bombs are now in production and even more powerful forms are in development.

It is an atomic bomb. It is a harnessing of the basic power of the universe. The force from which the sun draws its power has been loosed against those who brought war to the Far East…

Arthur W. Page, a legendary figure in public relations, wrote the release. Son of the co-founder of the Doubleday, Page & Co. publishing house, Mr. Page served as AT&T’s VP of Public Relations. During World War II, he oversaw the Joint Army and Navy Committee on Welfare and Recreation and was responsible for numerous communications and morale programs.

Noel L. Griese is the author of a definitive biography on Mr. Page. According to his account, Secretary of War Henry Stimson summoned Mr. Page to full-time duty in April 1945 and briefed him soon after on the Manhattan Project. The Trinity test blast would take place in the desert of Alamogordo, NM, on July 16. Mr. Page was asked to write the release that ultimately would be read to reporters at the White House on the day of the Hiroshima bombing while President Truman was at sea returning from the Potsdam Conference.

Arthur W. Page is credited with writing the most momentous press release in history. Whereas the 1969 moon landing–the 20th century’s other signature event–was beamed live to television audiences, Page’s release alone was the public’s introduction to the atomic age. It is likely the last time a sheaf of paper would change the world.

6 Responses to The Atomic Press Release