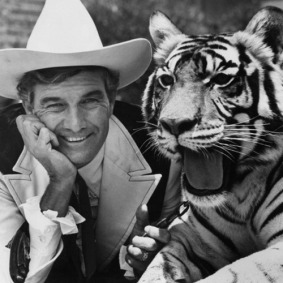 mega car dealer and pop culture icon, has passed away at 92. Growing up in Greater Los Angeles during the 1970s, I fondly remember Mr. Worthington’s heavy-rotation TV ads. He bought huge chunks of air time on the local channels, with weekends and late nights the preferred day parts. This brought me in constant contact with his marketing messages as I watched Channels 5, 9, 11 and 13 at these hours to catch their staples of horror and science fiction movies. (The War of the Gargantuas was incomplete without interludes from the lot of Worthington Ford.)

Media Strategy: Mr. Worthington’s media strategy was simple: saturate TV. He used a continuous media schedule on local stations, buying extensive time in off-peak hours. Even though he was not airing ads during All in the Family, his media budget was a prodigious $10+ million per year at its height. To facilitate this creative output, he founded his own company, Spot Advertising. In the end, his reach and frequency were overwhelming, blanketing the Los Angeles DMA (designated market area). He employed similar strategies in other markets from Alaska to Arizona.

Execution Style:  Worthington ads specialized in the one of the primary execution styles: humor. To counter a competitor who trotted out his noble pet German Shepherd during commercials, Mr. Worthington introduced “my dog, Spot,” a series of live animals that were anything but canines. The first “Spot” was a gorilla chained to a bumper. Other members of the menagerie included a hippo, an elephant and an orca, all of which Mr. Worthington rode while wearing his trademark Stetson. The results were deliberately cheesy and indelible. The era’s king of comedy, Johnny Carson, recognized Cal Worthington’s humor in spoofs and guest appearances by the car maven.

Music: Music is a fixture in marketing as an advertising execution style and a means of co-branding and cross-promotion. Mr. Worthington used it in all these capacities. His TV ads featured musical bumpers of “If You’re Happy and You Know It” with a hoedown feel and Worthington delivering new lyrics in an Oklahoman rap:

If you need a better car, go see Cal.

For the best deal by far, go see Cal.

If you want your payments low, if you want to save some dough,

From the mid 1950s until the end of the 1960s, Mr. Worthington sponsored country music television programming including Cal’s Corral, which featured stars such as Glen Campbell, Johnny Cash and Jerry Lee Lewis.

Branding: Cal Worthington had an unshakable sense of branding. He was the tall, folksy cowboy who promised “I will stand upon my head till my ears are turning red” to make a deal. He had no misconceptions about the public’s perceptions of car dealers. He was in on the joke and devoid of pretensions. His image was consistent and unique.

In some of my earliest work as an instructor–corporate training in marketing and sales at Prudential California Realty in the 1990s–I would announce myself as “Jason Karpf, graduate of ‘The Cal Worthington School of Marketing.'” I liked to use humor in my own marketing as an agent, and I knew the importance of frequency and branding. Now with three degrees and teaching marketing courses for universities across the country, I can say with affection and accuracy that Cal Worthington was my first marketing teacher. He remains a symbol of entrepreneurship and entertainment–an historic formula for success.